One thing that I have wondered about Super Smash Bros for 3DS and Wii U ever since I heard about the game was if the same playable characters will be available for both versions. Thanks to Now Gamer, I have the answers.

“Fundamentally we’re going to have the same characters on both systems,” said Sakurai. “If there was a character you couldn’t play on Wii U but you could play on 3DS, or vice versa, that’s rough for consumers.”

I agree. I would hate to purchase Super Smash Bros for 3DS and miss out on any exclusive characters for the Wii U version. I’m glad with his decision to have all of the playable characters available to use in both versions of the game. 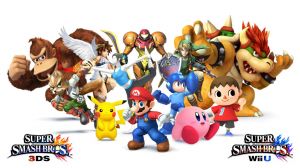 ( Super Smash Bros for 3DS and Wii U Character List )

Still, there are differences between both versions of the game. One of these differences is the appearance of characters. Although I prefer the high definition look of characters from the Wii U screenshots, I do not mind the 3DS ones. The black colored outline is said to help players see their character clearly due to the smaller screen.