In Shin Megami Tensei IV, Lilith will give you the quest called, ‘The Face of True Evil’. Basically, all that you’re required to do is find out what’s going on at a facility beneath the Hills Building in Roppongi. Before you do that, you must speak with a guy named Fujiware.

This guide teaches you how to find Fujiware and how to complete the quest.

Where is Fujiware in Shin Megami Tensei IV?

Fujiware can be found at a members-only cafe in Shinjuku. To find Fujiware and this cafe, use a terminal to transport yourself to Shinjuku. Find the exit that leads to the East Entrance of Shinjuku and go north to the next area. You should be at ‘Shinjuku – Kabuki Cho’. Go all the way down to the north eastern corner of Kabuki Cho and you should be good to go.

After finding Fujiware, go back to the Roppongi region of Tokyo.

How to get to Roppongi in the game? :

Keep going right and pass the skyscraper (Ashura-kai’s headquarters) and the first red warning sign area is the place that you’re looking for to complete the Face of True Evil quest. A demon is waiting for you there, so be sure to prepare for a battle.

Tenkai is a level 44 demon of the Famed race in Shin Megami Tensei IV. He does not have a weakness in the game and he blocks both dark and light one hit KO element skills. Force, fire, ice, electric, physical, and gun element attacks work fine against him. 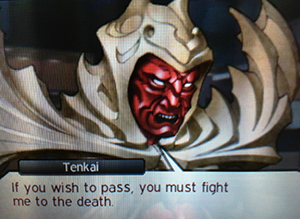 During your battle against Tenkai, you have conversation choices that can weaken him :

The first question he will ask you during battle (after you take out some of his HP) is what sort of city is your ideal Tokyo. Pick the first choice from the list below and your defense will increase. Some time after, he will ask another question. The 2nd question is related to what you plan to do after learning the truth of the Ashura-kai.

Note: The first answer may be different if past judgement actions are connected to this. As for the 2nd question, choosing another answer may increase Tenkai’s stats, however, it’s too late for me to confirm this (something like it occurred when I selected another answer).

Moves to use against Tenkai to win easily :

I used Tetrakarn to repel physical attacks (it costs a hefty 50 MP) and Mediarama to heal everyone in my party. Keep this up and you should be good to go since Tenkai has no weaknesses to exploit. Don’t constantly use Tetrakarn because Tenkai will not use his default physical attack each and every turn. He has three almighty skills at his disposal – one that steals HP, one that steals MP, and one that damages everyone on your team.

After defeating Tenkai, completing the quest should be easy. Just remember to heal yourself and your demons, as well as recover a decent amount of MP for random demon encounters.