Jumping like crazy.
A game made by one person, just to make you suffer. This is a review of Cubit The Hardcore Platformer Robot for the Nintendo 3DS. 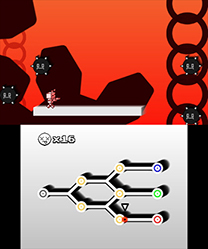 There were a lot of hard games this year such as Fire Emblem Awakening, Shin Megami Tensei IV, Sonic Lost World, Etrian Odyssey IV and Project X Zone, and this little robot is now in the list of the hardest games of the year.

The gameplay is simple. Basically, you have to jump to avoid enemies and obstacles. Every time you fail and fall, it will be counted. You can also choose the way, with three different endings to do.

The game includes a hardcore mode which is hard mainly because of the limited lives the player gets. Also you have to collect 6 stars, the six hard to obtain. 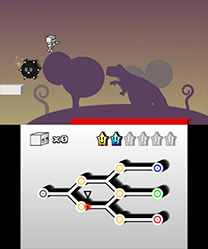 The controls are simple, but work excellent: you jump (and double jump in the air) by pressing “A” or “B”, and use the tactile controls for the menu.

The only problem I found with this game is the high difficulty, but that is the point of the game. With that, this is on the blacklist for casual gamers.

With three different endings and the hardcore mode, players will have a lot of replay value for hours of gameplay, however, the problem for some might be finishing the game.

The graphics of the game are okay. It’s simple, colorful and clean, but that is it. The 3D effect is also well done, but with the concentration you will need, this isn’t a feature you will use very often.

The soundtrack of the game is nothing special and really generic for this type of game, but it sounds good. After long gaming sessions, you might probably mute the game and listen to your own music because you’ll have to play a lot to finish it. 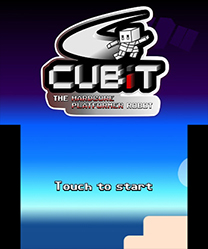 The presentation of the game is well done. It’s simple and you won’t ask for more. You can also select the part you want to start, so if you closed the game without finishing the part that you were playing, you’re able to continue without playing from the start.

A nice touch, but being unnecessary for this types of the games, is the tutorial that teaches you how to jump, if you go to the pause menu.

Another good thing is the challenges of the game, using a trophy-like system meanwhile you’re playing, that usually comes with every CoderChild’s game.

VERDICT: 80/100 (Good)
It’s simple, cheap and fun with replay value. I recommend this game if you have the skills for it because it has a lot of challenges to offer.