Depending on a decision you make in Shin Megami Tensei IV: Apocalypse, you will have to battle Dagda. He is a level 84 deity and he isn’t that easy to take down. This guide shows you recommended methods to defeat him. 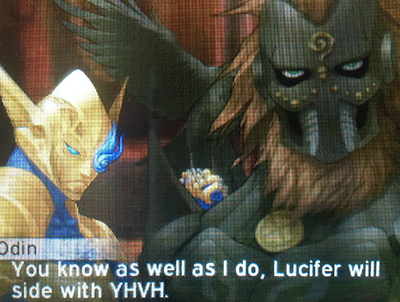 Dagda’s Weakness and How to Defeat Him in SMT4: Apocalypse

Dagda has only one weakness and it’s light skills. Other than that, he has resistance to fire and force skills. He may also have resistance against ice and electric skills, but I know he takes neutral damage from gun and dark skills for certain.

Preparations before the battle :

Armor to fight Dagda with :

As you can see from the list of his skills above, a majority of his attacks are physical. Armor that has resistance or nulls/repels physical attacks is recommended when battling him. Nibelungen (armor) can be purchased at the Ginza shopping district if you have a black card.

Stock up on MP healing items and light stones

Dagda is capable of draining your MP to the point you may not even be able to use the Energy Drain skill, therefore it is recommended to carry at least five MP recovering items for your protagonist (or demons but they can be swapped out) and several light stones (eg. Hamaon Stone).

Since you can’t select Asahi as a partner, Isabeau might be the best for this battle since she has access to healing skills. Toki is prompted by default to select some time right before the battle and I defeated him with her as my partner, however, Isabeau might be of more help to you.

Hallelujah might be an alternative because of his support to keep allies from getting lost.

Make sure to either have your protagonist or demons with stat lowering skills such as Debilitate. You will need to lower Dagda’s attack because after he gets a surge in power some point during the battle, he can utterly destroy your entire party with Megidolaon.

Fighting Dagda on the battlefield

A party full of light skills isn’t necessarily needed. After the first part of the battle (which I think is triggered by dying or a specific number of turns), use skills to lower his stats and hit him with anything he doesn’t resist.

He might use Luster Candy every once in a while to recover but make sure to use your stat lowering moves more to keep him down. Watch out for Energy Drain because it hurts your MP a lot. With his stats lowered, you should be able to manage with energy drain by itself (healing helps too).

Using light skills to build up extra actions is good too (with the addition of assault attack).

After showing off your power to him a bit, he will say how your power is all your own and ask why you think you need friends. You will have options to choose for your answer :

After defeating Dagda, you will obtain the Destiny Stone and proceed with the main quest.