Team Kirby Clash Deluxe is a free-to-play 3DS game where players can purchase gem apples using real money. If you want to save some extra dollars and you do not mind waiting to play, this guide shows you alternative methods to obtain gem apples other than paying.

How To Get Gem Apples in Team Kirby Clash Deluxe

Press “Y” when hovering over the mission to view the heroic missions.

Always focus on completing the missions when trying to take down the enemy. The above missions require that you play as the sword hero role, defeat the enemy without anyone fainting during battle, and do well enough to earn the silver or gold medal.

Harvest from the gem apple tree 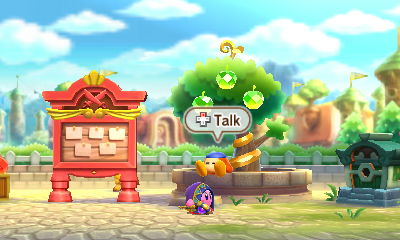 Every once in a while, Nintendo will give out passwords over the Internet which you can use to get free gem apples. Nintendo has not revealed where they will publish these passwords, however, they will likely be spread via word of mouth.

Wait until Sunday to get more gem apples

Purchasing gem apples on Sunday via eShop will grant you additional gem apples. Not to mention you will be able to harvest more gem apples from the tree each time you purchase from the eShop.

After purchasing from the eShop, the number of apples you receive from the tree from harvesting will increase. Therefore, after each 12 hours, you will receive much more gem apples than the default 5 given to free users (I received 5 the first time I talked to Bandana Waddle Dee).