The shadow core, also known as the key to the locked door, is located to the bottom-left corner of the door. From the door, go down and move left. You should eventually find a sparkle. Go up to it and press the A button to get it.

This might only occur in New Game+. If you do not see the sparkle, try looking through other areas of the Bottomless Pit for one of those fancy buttons you see on the floor. A cat-like creature similar to Coco from the save data area should appear and try to give it to you. 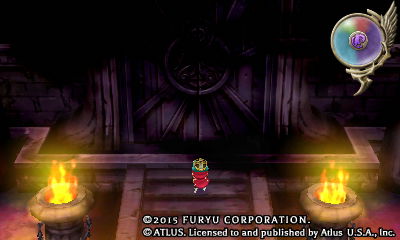 Once you have obtained the shadow core, go to the door and it should open.

Be prepared to battle some powerful foes and if you’re stuck after opening the door, you can read this guide to find out what to do next.