I have to say I liked both games, but it wasn’t the same with Glory of Generals. While it offers even more content than the two aforementioned games, the experience was different. 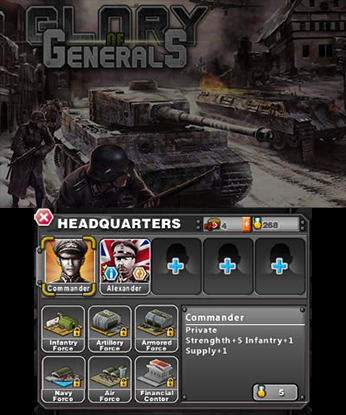 GAMEPLAY:
Just like the two games I mentioned above, Glory of Generals is a strategy game based on World War II. Of course, this is a fantasy setting as you’re able to play as Axis and Allies, with some “alternative universe” missions including the Invasion of North America.

There’re two modes; Campaign is like the story mode of the game, featuring a large quantity of missions from two different points of view (Axis and Allies). You will need to beat the missions in order to unlock the next ones, and you will be able to unlock the next campaign once you beat all the levels (there’s a total of four).

The Legion mode is a little more different: you will have access to all the missions from both points of view (still, you will need to unlock the other three campaigns) and plays somewhat like a free mode allowing a bigger variety of options.

Now it’s time to talk about the gameplay mechanics:

When your turn starts, you will be able to do certain actions with your units; the units you can use will have an orange color in the flag on the map and unused units will have a blue ring around them. In each turn, you’re able to move and attack once (but if you attack you can’t move later). You can also, if you have the resources, do certain actions with your units, and the one you will use most is healing them. Still, attacking your enemies won’t be all you do – you will need to explore and find them. 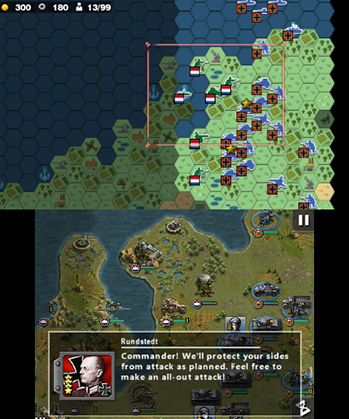 Each turn, you will be able to win a few Industry Points and money, where you can use for building strategical parts, deploying more units, contracting a commander or doing special actions like espionage or attacks. The game offers more than one hundred commanders to use; each one has its own skills where you need to take advantage. There’s also a limit of 99 turns, and if you didn’t win after the last turn you will have a game over.

Also, a unit can win morale when it beats an enemy or it contains a commander. A high morale can allow you to do more attacks on one turn, allowing you to turn the tables.

While it sounds interesting, the player is only able to control a few units whereas the other are CPU controlled, making it a more limiting experience: you’re not controlling the game at all, because the game is also controlling you. This usually should help making a more exciting experience, but it only makes it a boring one. Still, you aren’t forced to watch the action of the CPU (with both, allies and enemies) as a button is offered to skip them.

Something important you should remember there’s no auto save at all in the game and you must save manually. You can also save when you’re playing, so I recommend to do it often. Glory of Generals is usually stable, but it freezes and restarts a few times, and if you didn’t save before, be ready to lose a lot of progress.

If you still have questions about the boring experience, here are more reasons: some mechanics of the game aren’t explained at all, like the terrain effect on the troops movement and attacks, or the difference between the countries (knowing a lot of history can help here). I want to keep the explanation short, so the best way to describe the experience is a “Rock, Paper, Scissors” game with random values that aren’t explained.

The controls are pretty simple: the game is mostly with the tactile screen; still there’re some actions with the buttons: with the Control Pad you move the tactile screen map (you can zoom in or out with L button or move faster with Y button), with the Circle Pad the map of the 3D screen, you can search unused actions with R button or commanders units with X button. I would have preferred the option to move both maps at the same time, the experience can be more comfortable that way. 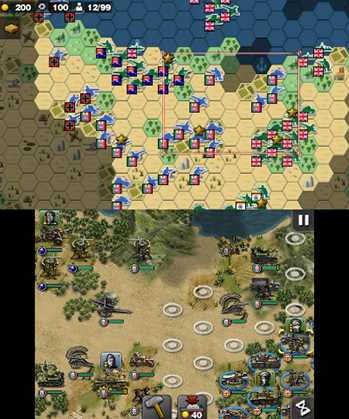 GRAPHICS & SOUNDS:
The graphics of Glory of Generals are nicely done but nothing impressive at all. There’s a dull 3D effect for the map screen, but considering you need to play using the tactile one, you won’t use the 3D feature at all (it would be distracting).

There’s a limited quantity of sounds (although it doesn’t matter at all) and the music of the game is extremely limited, so I actually recommend to play this muted considering the high quantity of content it offers.

PRESENTATION:
The presentation is good overall, including the large amount of content, there’s a simple manual and a good explanation of the game mechanics. While it’s quite simple and rushed, it still good for most of the players, but the most hardcore ones will suffer due to some unsatisfactory explanations.

The price tag comparing the mobile version ($2,99 for the HD version and $9,99 the 3DS one) doesn’t help at all with this title, and I would recommend to buy both Conqueror games instead.

CONCLUSION:
For a strategy experience game, this isn’t the best entry for the console (where I already recommended the other titles from the same developer). Although it offers a lot of content, where some missions can last more than one hour, the experience isn’t attractive like it should.