The Green Dragon is the most powerful foe you will encounter so far in the game and it isn’t going to go down easily. It took over 50 attempts for me to finally bring it down (possibly around 80-100) and as of writing this, I’ve finally done it.

This guide will give you various tips and advice on how to defeat the Green Dragon in The Legend of Legacy. The Green Dragon can be found at the Lizardman Domain on the top-right corner of the Bogsaur Marsh map. 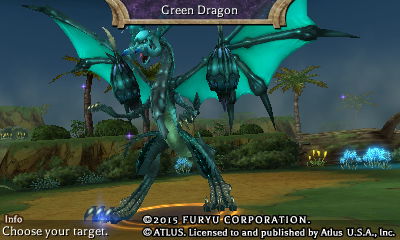 How To Beat the Green Dragon in The Legend of Legacy

Setting up your party before the battle begins :

Before you go head to head with the Green Dragon, you have to prepare for it. One of its major attacks that can cripple your party is its poisonous dragon breath. To avoid getting poisoned, you should equip your party members with gear that prevents the status condition.

Below you can view the party members and their stats I used to battle the Green Dragon :

Owen’s set-up can still be affected by poison, but its gear reduces the chances of getting poisoned from the dragon breath attack. I used one of the permanently learned water skills from Bianca (Purify or Rejuvenation) to heal him whenever he did get poisoned.

Using shields with additional effects are useful even if you do not have to protect your other party members with it. If you’re going to use skills that blocks and counters attacks, you should definitely equip a shield with a high guard rate to them.

Take control of the battlefield :

There is an 80% chance (from my experience) of the Green Dragon using its poisonous dragon breath attack at the beginning of the battle. You can try to predict it and heal the poison before getting poisoned on the first turn (the dragon always attacks first).

After, let two of your characters (in my battle, they were Eloise and Bianca in non-attack stances) use the singing shards to cast their effects on the battlefield for two turns. Owen was used to attack on the first turn and on the second turn, he countered the dragon’s triple attack. Once the two turns are up, let the water shard character repeatedly use their singing shard and let your air shard character use attack skills while your next character counters attacks from the dragon [Owen’s Readied Stance or Eloise’s Fluid Strike (DMG 50 / block and counter attacks)]. You can switch turns to use the shards between users to make sure its shadow and fire elementals do not get stronger. The water shard also helps your party recover HP every turn (the more it’s used, the more HP you get each turn). Of course, try to predict when the dragon will not use a triple attack to avoid wasting a turn by using the counter skill.

Remember to heal and take back the water and air callings/contracts with the singing shards when the dragon tries to steal it. The ‘water calling/contract’ recovers 999 of the dragon’s HP, therefore you SHOULD NOT let it keep it for too long (it’s better if you keep using the water shard to call the water elemental so that you take it back before it gets a chance to recover the HP). When the representation of the shadow and fire elementals in the elemental scale on the bottom screen of your Nintendo 3DS (during battle) gets to under 25%, you can start using attack skills instead of the water singing shard, but make sure to use it next turn or another shard to keep the purple (shadow) and red (fire) colors under the percentage. 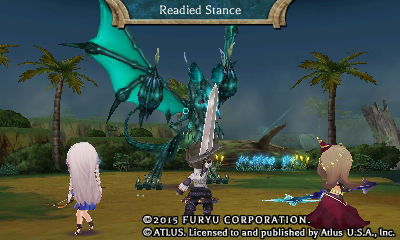 Try to predict what the dragon will do next to use countering skills (50 DMG skills are the best countering skills your party members can get at this point), change stances depending on the skills you are going to use, keep using singing shards to control the elementals on the battlefield, heal your characters when necessary, and try to get in as many attacks you can as possible.

From counting the damage I dealt to the dragon during my battle, it has around 25,500 HP. 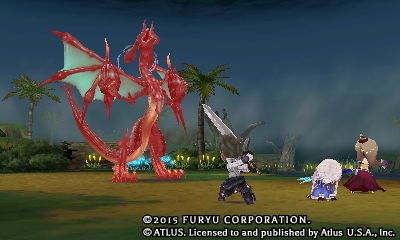 What do you get after beating the Green Dragon :

After you defeat the Green Dragon, you will obtain the Poisontail Ring item (not sure if there it is a guaranteed drop). It protects the user from both fire and poison attacks, and it can be equipped in a character’s slot.