There are sharks in Animal Crossing: New Leaf. No, they are not dangerous – well, at least in the game. Players can catch sharks and sell them to earn Bells (also known as game money), or they can donate them to the museum. There are different types of sharks.

How To Catch a Shark in Animal Crossing: New Leaf

Catching a shark is more difficult than catching a fish or other sea creatures in the game. Sharks can easily get away, and they are rarely seen during gameplay. 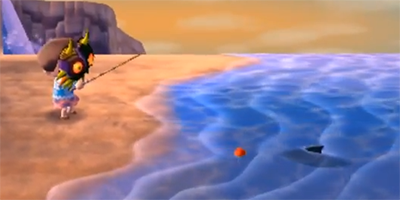 The basic and most important rule of catching a shark in Animal Crossing: New Leaf is to throw your fishing rod at it, wait for it to bite, and as soon as you hear the sound, instantly reel it in. If you fail, the shark will escape and it will take a while before you find another.

What’s this sound that I’m talking about?

When you’re catching fish, you hear a bubble sound, right? Well, it’s the same with sharks. However, sharks do not get trapped for an extended amount of time like some fishes. That’s why I said they’re not easy to catch. Instead, you have to wait until you hear the “bite” sound during the gameplay, and as soon as you hear it, press the “A” button on the Nintendo 3DS to reel it in. I’m not talking about the tease bite – the shark will get away.

When catching fishes/sharks in the game, there are two different types of sounds that you hear when the fish/shark bites your fishing rod. The first sound is like a tease which you hear several times. At the last moment, you will hear another sound – a different sound (eg. “gulp”). As soon as you hear this new sound, press the “A” button to catch the shark, or it will get away. Learn the differences between the two sounds by catching fishes first.

Still confused… See a video of someone catching a shark in action on Animal Crossing: New Leaf. The video was created by Kris (AKA “Cuddleofdeath” on YouTube and Twitter).

It might be difficult to catch a shark on your first try (especially if you’re not good at catching fish in the game), so keep trying and eventually you should catch one.

Where to catch Sharks in the game?

If you’re having problems finding a shark in the game, I recommend that you read my guide about finding sharks in Animal Crossing: New Leaf. It gives you times and locations.