People often think of simple premises as something trivial. In other words, it’s something the gaming community often overlooks. Muse Dash sets its entire gameplay identity on the fact you use only two buttons. Without thinking, we put this game in a certain mindset. How engaging can such a simple game be? Is there more to this particular game than it seems? Will Muse Dash, dash its way to your system? 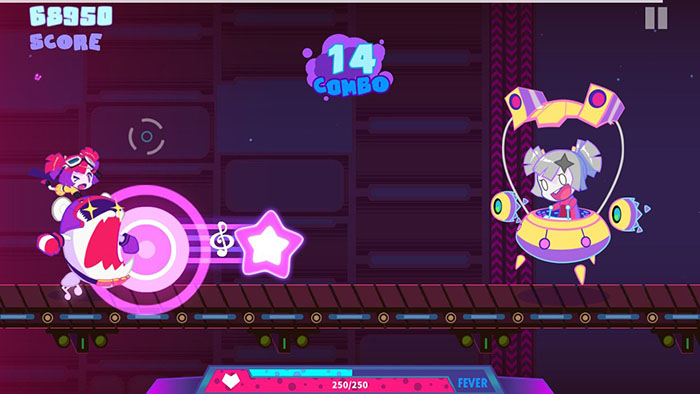 Adorable creatures are taking over the planet. It’s up to the three muses to clean up their mess. Play as Rin, Buro or Marija as you travel around chibi anime-inspired levels. That is all we know about the story. A quick scene flashes with this information. Muse Dash does not have a traditional story mode. Play through the selection of levels to earn high scores and to level up to unlock goodies.

Your character autoruns as you must strike notes in the sky or ground. Blue music notes can be collected to gain more points and hearts to heal your health. There are also score notes that must be held down to complete. Your character has two meters, one is for your health and the other is for your fever meter. The goal is to the fever meter filled as fast as possible. During fever time, you will earn more points.

In addition to fever time, the game offers a hidden note system in the form of ghost enemies. Hitting those notes aren’t mandatory, but it will add to your overall score and might even contain hearts. So keep your eyes peeled for those ghost notes. Minibosses and boss characters have the ability to get hit multiples times in one strike at certain parts of the song. It resembles the goalpost barrel in Donkey Kong Country Returns. 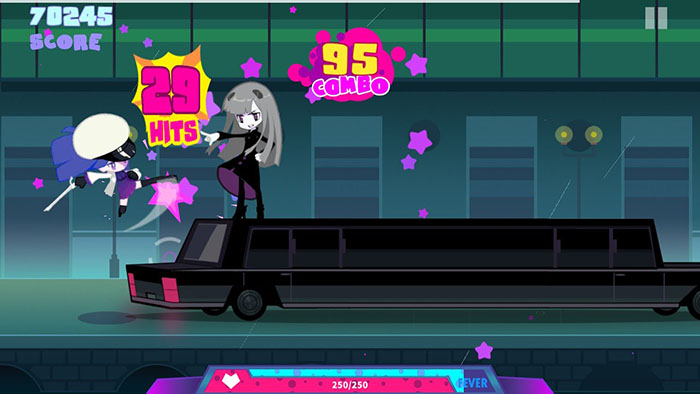 There are fourteen characters and eight elfins to use. Each character and elfin have their own set of skills. Skills range from granting invincibility, making fever time last longer, gaining more experience points to increasing health and more. This is the best part of the game as it lets you strategize in how you tackle a song. Some characters and elfin setups are better on specific songs. Since this is allowed, harder difficulty settings do not have to be altered to appeal to the mass audience as they can beat those levels with the addition of character and elfin skills.

Muse Dash chooses to go the simplistic route for its controls. Only two buttons are required to play this game. Press right on the split d-pad to hit the notes in the sky and press Y to hit the ones on the ground. If those are not to your liking, you can change the controls in the options menu. For an extra challenge, players can set fever time to a set of buttons. If buttons aren’t your thing, you can try your hand out in touch control.

At the time of this review, there are over one hundred songs in the game. The bulk of the music genre in Muse Dash is K-pop like songs and techno-based songs. Even though it has a strong focus on K-pop and techno, the songs are catchy enough for anyone to follow. There’s a vast range of slow and fast pace songs. It’s not just the sound of the music that is essential, but the fact that the note icons perfectly line up with the beat of the music. They play in perfect harmony. This fact never changes in any of the game’s three difficulty settings.

If you wanted to look up replay value in the dictionary, the words Muse Dash should be right next to it. Unlocking songs, playable characters, artwork, master difficulty, and elfins are the main objectives for replay value. However, that is just some of the replay value in this game. To acquire master mode, one must get an S on the hard mode of that song. Achievement hunters have their work cut out for them in this game. There are achievements for each song on all of their difficulty levels, a system-wide achievement chart and challenges that change every six hours. Not to mention the online leaderboards that track who are the muse masters of the world. 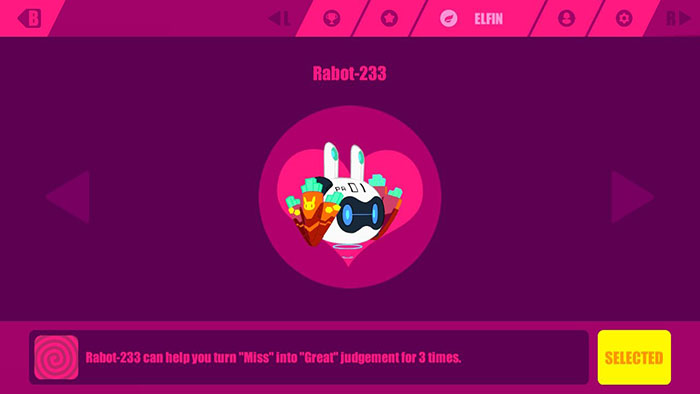 Characters and elfins are the grinding parts of the game. After each level, you earn experience points. Your reward for leveling up is two random treasures. Each character and elfin have a special treasure that is just for them. For instance, if someone wants to use Rin’s Sleepwalker Girl costume they would need to obtain eight pillows. Since the game spits out the treasures in a random number generator fashion, players have no clue when they will receive the character or elfin they want. The game makes this matter worse by including photo scraps as a possible treasure item. Photo scraps are used to complete pictures, nothing was a bigger buzzkill than receiving two photo scraps as your level up treasure reward.

For lacking a story mode, Muse Dash does an excellent job of making up that fact with the number of different things to unlock. The smart idea of the simple yet depth filled gameplay is where the game is at its finest. It’s shameful that your potential character preference is locked behind grinding because that affects your gameplay strategy. Although the game has excellent varying enemy types in a level, it fails to have a broad range of backgrounds. That may not seem like the biggest problem, but when you see the same background for the tenth time it loses a bit of its appeal. Above all else, Muse Dash is a craftily designed rhythm game in which everyone can enjoy and play.