Usually when a developer makes a terrible game, there’s a little bit of sympathy for them that sprouts from the notion that they didn’t know what they were doing wrong or they didn’t have enough time, and they will deliver next time. Unfortunately, Snowboard Xtreme proves that some developers are shameless enough to reskin the same game over and over again in the hope that it’ll be successful (cough, Activision, cough). EnjoyUp Games brings you Snowboard Xtreme a.k.a Another Crazy Hunter Reskin. With Crazy Hunter, everyone agreed it was a terrible and unplayable game but were still forgiving of the developers since we all know, as some of EnjoyUp’s other efforts prove, that they can make great games. With Zombie Skape, a reskin of Crazy Hunter, sympathy lessened, but everyone moved on and thought that the game’s critical failure had managed to convey to EnjoyUp that such half-baked efforts just won’t fly. With Snowboard Xtreme, a reskin of Zombie Skape which is in turn a reskin of Crazy Hunter (yeesh, that’s an awful lot of skin for a game, isn’t it?), we have to wonder how EnjoyUp manage to sleep at night.

Like in Crazy Hunter and Zombie Skape, your character, in this case a snowboarder with an annoying voice, is moving continuously upward on the lower screen while the upper screen also shows the environment ahead. One thing new is that you don’t have any health – you have a time limit, and if you fail to complete the level in that time it’s game over. The braking function from Zombie Skape has been removed, so you use the D-Pad (and on the 3DS, the Circle Pad) to move around while you press any of the other face buttons or triggers to jump over obstacles. Red and green signposts indicate which direction you should pass them in, and if you do so you’ll get a couple of extra seconds. That’s all there is to the basic gameplay. The controls are just as sluggish as they were in Zombie Skape, which means the developers decided to ignore the very reason the first two games this game is a reskin of were panned so much. Even worse, since braking has been removed, you have even less control over your character than you did in the aforementioned two games. 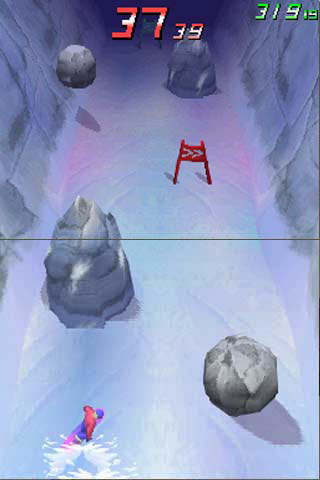 The visuals are bearable: obstacles are in 3D and the kicked-up snow effect is fine as well. There’s basically no variety in the environment, and that hurts even for a game set in a snow wasteland. The music is very similar to that of late 1980s arcade games. Obviously EnjoyUp were hoping that we would say hello to nostalgia and like the music of the game, except that the same music plays throughout over and over again until you hate it. The character’s voice, that goes, “Yeah,” every time you pass a flag – I wish there were words to express my annoyance at it. A new game that features such sounds and hopes for nostalgia invites scathing criticism over its audio.

One can’t help feeling that there is something missing in the gameplay, possibly a second does-it-even-function playtest version. The development of this game could have been completed by a single person in one long afternoon. Obviously EnjoyUp were hoping, just like alchemists hoped to convert inferior metals into gold, that the third time would be the charm and everyone would somehow like this game when they hated the games it reskins. It’s rather obvious that the gaming industry revolves around money, but most developers and publishers to an extent do a pretty good job of hiding it (and only release sales figures when a game is an immense success at that.) EnjoyUp, however, make it terribly blatant that this no-budget game was slapped together in the hopes of making money. Pure, green money. It’s clear that this plan didn’t work all that well and just like Crazy Hunter and Zombie Skape it went over as flat as a mu shu pancake.

The good news about Snowboard Xtreme is that it could have been worse – unplayable, see. The bad news is, it’s awful anyway. From the developer behind great games like Little Red Riding Hood’s Zombie BBQ, Chronos Twins and 99Bullets, it’s even more disappointing. There is absolutely no excuse for the game – it’s just terrible and one of the lowest points of the DSiWare library. You shouldn’t buy it even for a giggle, because pretty much no one can enjoy this game or even play it for longer than it takes to cringe and decide to delete it.