What if the mushrooms ate Mario? Tangram Attack takes the tangram concept and flips it around entirely. Instead of joining pieces to create a shape, you have to slice them apart one by one under some conditions that make it more challenging. Is it worth a look by puzzle fans?

There are four modes: Academy, Arcade, Zen and Blitz. You are taught the game’s rules by a highly disciplined (and slightly intimidating) rabbit dude in Academy mode, which is like a start-stop tutorial mode. You earn belts as you would in martial arts in Academy mode as you progress. For each belt, which can be considered a ‘chapter’ of sorts in the academy mode, there are a couple of levels in which you are taught the gameplay, then some levels which play as normal ones, allowing you to use what you’ve just learned. Academy mode is the only mode playable at the start; the others have to be unlocked by progressing in Academy mode. 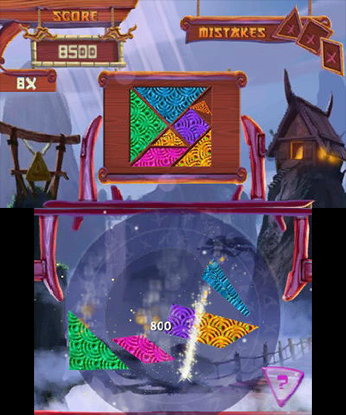 The game is played on the touch screen, and all you need is your stylus. You are given a shape constructed from tangram pieces and then have to slice off each piece one by one until the whole shape disappears. You can only slice off pieces that can be removed with one slice from the stylus. At the start the tangram pieces are differently coloured, but later on they get the same colours and you have to refer to the upper screen, which shows the shapes and sizes of the pieces, to help you solve the puzzles. You get score multiplers for slicing consecutive pieces off with no error.

Visually, Tangram Attack looks simple and nice. The colours are bright, there’s a cool lightning-put-the-pieces-together when each shape is constructed, and you can change the pattern on the shape in the options menu. The sound effects are fine and the music fits in with the whole Zen-master-and-pupil feel of the game. The sound effect for the lightning visual effect often goes out of sync, but there are no other noticeable problems.

Although there is the occasional wonky stylus input that ruins the score multiplier you were so happy with, for the most part the game controls well. Tangram Attack isn’t the best thing on the planet, but it slices its way into the subset of games puzzle fans are likely to enjoy.