Thomas Was Alone is another port that Curve Digital brings to the Wii U eShop, and like their previous releases the port job is great, if not perfect. And while it looks like a flash game in the screenshots (I won’t lie), the game is well known for its narrated story.

The gameplay mechanic is pretty simple: you need to play different levels that work in a mix of platforming and little puzzles, where it makes great use of every character skill without overusing it, avoiding repetitive gameplay. In order to beat the stage, you need to move each rectangle to its objective (you will see white lines on the level); once each shape is in its place everyone will be transported to the next stage. 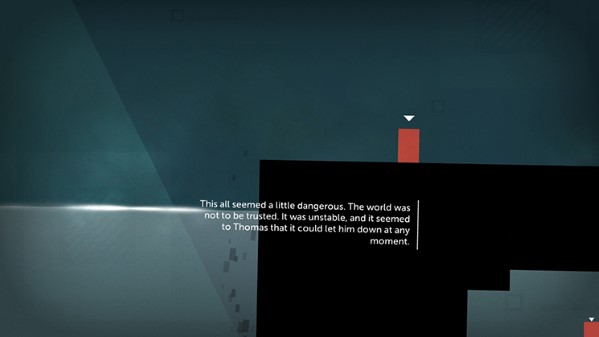 Thomas Was Alone isn’t only about gameplay, a story is told in the background about the shapes with a good use of twist between the chapters, allowing the whole game to make sense: it’s what makes this game magic. It also helps that the campaign is lengthy; you will need between three to six hours to finish it (and there’s reason to play again).

Some examples of the unique skills for each shape include jumping higher, being able to float in the water, allow other shapes to bounce on you, pass specific places, anti-gravity… I don’t remember well the quantity of characters (since I never counted them), but there’s a good quantity of them.

Like I mentioned, there’s water: since only one shape can float, the others will die if they fall on it. You can also find moving platforms, switches and spikes, for example, adding challenge to certain stages, but a common element is the checkpoints: if your shape dies it will be back to the latest checkpoint instead of the stage’s start, but unlike most of the games there’s a difference: each shape needs to pass trough the checkpoint and not just one. 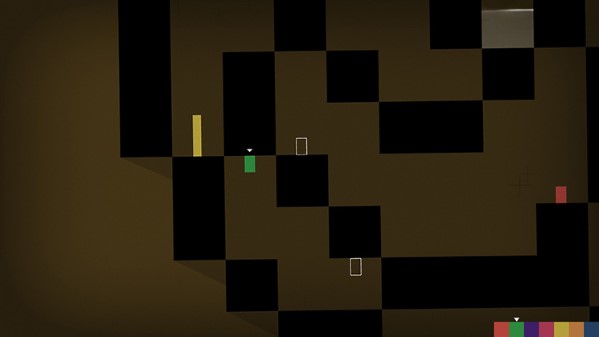 Graphically, the visuals are really simple, presenting a minimalist design but at the same time they’re greatly done, since the backgrounds and the illumination actually help a lot with the simple look of the game. The audio is excellent: the music is well done, the sounds’ quality is great, the voice acting perfect and you can even hear a commentary from the developer while you play the game. Just the commentary makes you want to play the whole game again; it’s really interesting to hear about the development process.

The presentation of the game is great, the interface is really easy to use, the quality of the content is better than I expected, it’s lengthy and of course, the Off-TV mode is present. The controls are well done (you will be using the L-Stick to move and the A or B buttons to jump), and the Wii U Pro Controller is supported if you want to use a normal controller.

Conclusion:
Thomas Was Alone plays great on the Wii U and the Off-TV mode helps even more: it’s an amazing game and since the price tag is similar to its PC release, there is no reason to not recommend it. It’s really simple, but also deep at the same time.