Hresvelgr is a level 75 raptor demon in Shin Megami Tensei IV. This guide shows you where to find him in Tokyo, shows you what he looks like in the game, what element attacks he is strong and weak against, and how to beat him. 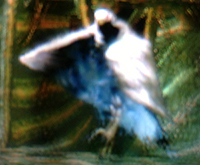 ( See what Hresvelgr looks like in Shin Megami Tensei IV )

Sorry for the blurry picture. Blame the 3DS screen and my iPad’s camera.

Hresvelgr can be found at the Kiou Shrine in the Shinjuku Region of Tokyo. If you are at Nakano in the game (Note: Nakano is part of the Shinjuku Region), go right until you reach Takadano Baba. You should eventually come across a poison swamp (color is pink). As soon as you enter, go down, followed by a left turn. Burroughs should warn you that it is a demon’s domain. Still, enter. After completing the maze, you should encounter Hresvelgr. The map below should give you a better sense of direction : 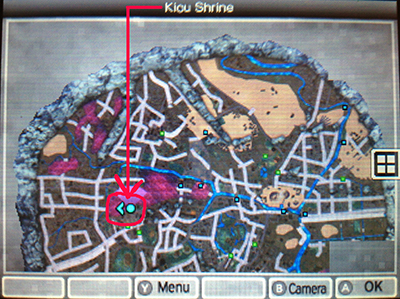 ( Where to find Kiou Shrine in Shin Megami Tensei IV )

Try to match this part of the game’s Tokyo map with the one in your game when you discover the pink poison swamps. From there, it should be easy to pinpoint the location of Kiou Shrine to find Hresvelgr.

Hresvelgr is strong, however, he has a weakness. His weakness is fire element attacks. Take advantage of his weakness to gain an additional turn to drain his HP a second turn. You will need all of the turns you can get because Hresvelgr is very strong.

It’s also good to have a demon on your team that blocks ice element attacks. I used Peallaidh (yeah, I fused him) and Vouivre on my team. Both demons block ice element attacks, and they know a fire element skill. An Agilao stone (medium fire item) also comes in handy.

Note: When fusing demons, you will be required to teach them a fire element skill.

I defeated Hresvelgr by only using fire element attacks. I was hitting him with full force while he lacked turns to attack. I had about 8 turns before he got a chance to attack me twice. Weaknesses in the game is a huge advantage in a fight, that’s for sure.

Another thing that you should know is, Hresvelgr blocks ice element attacks.

What reward do you get for defeating Hresvelgr?