There is a quest that players can take on in Shin Megami Tensei IV called, Capture the Berserker. To complete the quest, you will be required to find Wu Kong, defeat him in battle and capture him. The screensohot below shows you what Wu Kong looks like : 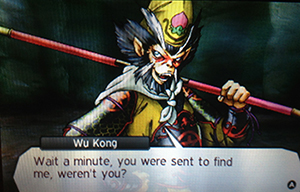 Note: To find the berserker, Wu Kong, you must first accept the Capture the Berserker quest.

This guide tells you where Wu Kong is and teaches you his weakness.

The information that you get for the quest says that Wu Kong is somewhere in Naraku. What it did not tell you is that Wu Kong is hiding on the 4th Stratum of Naraku. See the map below to find his exact location. In the game, he appears as a pink figure. 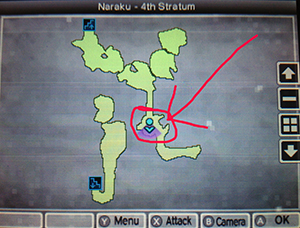 What is Wu Kong’s weakness and how to beat him?

Defeating Wu Kong is easy. He isn’t as tough as Minotaur or Medusa in the game. As long as you do not use physical or gun element attacks, you should be fine, assuming your protagonist is over level 30 and you have a strong party with his weakness.

Wu Kong Will Try To Run

After taking down some of Wu Kong’s HP, he will successfully run away. Luckily for you, it is possible to find his location on your mapper app. The tricky part is that he escapes to different floors of Naraku each time he runs away.

Where to find Wu Kong after battling with him for the first time :

After defeating Wu Kong on the 5th floor of Naraku, he will surrender. The reward for completing the quest is the Tokkosho, a slash type item with a low hit rate that can be equipped with a power of 139. It will also be possible to obtain Wu Kong from a demon fusion via the Cathedral of Shadows.