Note: For this review, I played the following tables: Guardians of the Galaxy, Deadpool Doctor Strange and the Walking Death. I will also make a small review of each table later.

Note 2: Meanwhile only trials are playable for free, the review is aimed to be focused considering it as a game, or how it’s after buying a table. 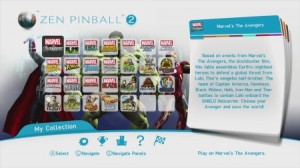 GAMEPLAY:
Zen Pinball 2 is more like a platform rather than a game, where you need to download this title in order to buy and play the tables using a “try before buy” model. Every table can be played (with some limitations) before buying it.

The process of purchasing new tables is kind of weird: in order to buy a new table, you need to go to the eShop, download the free trial and buy the key (if you just buy the table but do not download the trial, you won’t be able to play it). It would have been nice if the normal DLC process was used instead, but it still works (if you are playing meanwhile you are downloading the table, remember to restart after it finished in order to have access to it).

Each table contains several options and features, including two types of multiplayer (split screen and hotseat, aka by turns), a complete ranking system, a manual, two awards and several options, so don’t expect a lack of replay value here. The different options you will discover are on the operator menu and if you are not interested in the online rankings, you can change the game rules, a few physics and as a little extra, the few test features present on the original machines (useless but a cool touch). 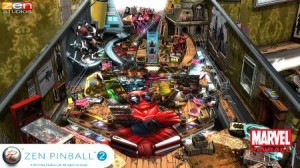 That doesn’t end here: each table has its own missions (some of them can add little mini-games) adding a lot of gameplay and replay value. Those missions depend on the table (and there’s also an explanation about it).

The controls are pretty simple: you control the flippers with L and R buttons, launch the ball with the A button (or the Control Pad if you want to do it manually), change the camera or activate the view mode with X button and shake the table with the L stick. You can also customize the controls if you want.

GRAPHICS AND SOUND:
After playing most of the trials plus the four tables I mentioned earlier, I can say the graphics are excellent, featuring a great quantity of details in both the table decoration, the models used and the illumination of the table, including the famous orange screen from the actual machines. If it wasn’t for the interaction of the model, it feels like a real pinball machine.

The soundtrack for the other side features a few songs or melodies, voice acting and a bunch of fx sounds for each table, doing a sublime work in most of the tables. 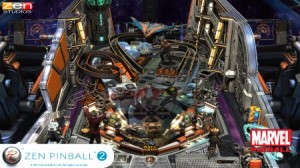 PRESENTATION:
With a good manual (still outdated from the original release), a bunch of options (controls, visual, audio), a manual for each table, a great interface, online rankings and variety, Zen Pinball 2 is really a great option to buy tables.

The only two problems that I encountered with the game are (1) the need to go to the eShop in order to purchase DLC and (2) outdated status of the manual.

CONCLUSION:
As a platform, Zen Pinball 2 works excellent and the pinball tables are great as well. Featuring a good quantity of options, missions and replay value for each table, the game is really worth its price and it’s a must have for Pinball fans. I rarely recommend to try it before buying it.