Similar to the Green Dragon, the Black Dragon has 25,500 HP (yes, I counted and estimated it myself) and it’s one tough enemy to bring down. Battling it is optional since the only area it permanently blocks your passageway is on the Ninth Stage of the Summit of the Gods map. 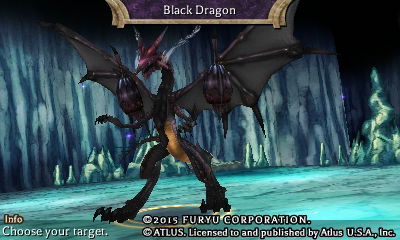 How To Beat the Black Dragon in The Legend of Legacy

What you need before the battle :

Strategy when battling the Black Dragon :

On the first turn, the Black Dragon will most likely use its acid dragon breath which lowers all of your characters’ defenses. Air Wall and Cloud Armor skills aren’t very effective against a majority of its attacks (only Cloud Armor against its bash attack, but it is not commonly used). Use this turn to set up all contracts with the elementals and don’t forget to use a defensive stance. The water contract should recover a decent amount of your HP.

Let your fire singing shard user set up a fire shield on the next turn while your water singing shard user strengthens his/her water contract and your next character use a counter skill to make an attempt at protecting them (the dragon may successfully hit your characters or use a fire/water/air calling). Of course, you can test your luck and try to get a free hit if you predict the dragon will use an elemental calling move. Hopefully it uses water callings on the same turn you use the water singing shard so that it does not recover 999 HP for a turn. Never let it keep the water calling for too long because you will not be able to defeat it.

Switch your stances to an offensive formation when your party members have a good amount of HP to tank hits or when you feel the dragon will not use its Hellfire skill. Always let one of your countering characters use a countering move when you switch to an offensive formation and let your other two characters damage the dragon with powerful skills (don’t use the same skill twice in a row. Instead, mix it up or they might do less damage).

Take turns using counter skills between the countering users to make sure each elemental contract is being used every once in a while and that you’re hitting the dragon hard when you can. When your SP is getting low, take advantage of the air contract, otherwise [1] use a counter, water contract (to increase HP recovery each turn) and an attack/heal or [2] a counter and two attacks from your hard-hitting characters.

Keep this up and eventually the Black Dragon will fall, however, it may take a handful of attempts from my experience battling it. The Black Dragon’s hellfire is strongest when it uses a fire calling to get support from the fire elementals (so be sure to steal it back with a fire contract) and when all of your party members are not in a defensive stance.