This is the final temple in Ary and the Secret Of Seasons. This guide will teach you how to find the Winter Temple and how to clear it.

How To Get To The Winter Temple

Go to Yule’s Elevator and use the lever to bring the elevator down. Pull the lever again and jump on the elevator to go up. Find a cog/gear and press X, then go to the area where the orange icon displays on the map. You’ll need to use the green season’s power to reveal vines on the wall. Climb it and you’ll eventually make it to another, more difficult wall. For this one, you’ll need to climb the vines, jump off, and then use the green season power to summon the vines on the top part of the wall to climb.

After entering the outer region of the Winter Temple, you’ll be blocked by a door. If you look up, there should be two lights where you can summon season spheres. Jump and use your season powers to hit those lights and the door will get unlocked. 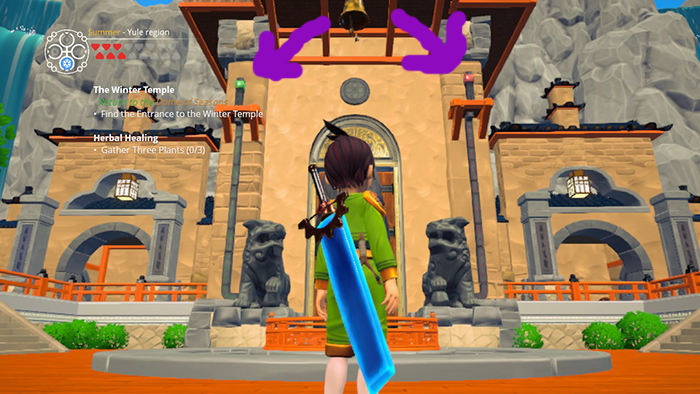 You will find two enemies in the first room. Use the blue winter season power to turn one into an ice block and drag it to the square area at the center of the room. Go upstairs and hit the two lights with their respective season colors to trigger another event. Position the lasers in a way they hit all of the white objects and the door will open.

Explore the next area. Use the blue season power when you jump down to an area with a seasonal stone. Defeat the ice enemies that appear and you should find a treasure chest with the Ice Pebble Skill. Use the slingshot to shoot at the floating icicles and form icebergs to stand on. Form a path to the energy ball on top and carry it to the holder you would have seen before. Go through the door on the opposite side and climb up the ice stairs. Defeat the enemies and shoot the icicles to form a path upward until you make it through a door.

Go to the left building and climb up the ice stairs you made from hitting the stone with the blue season power. You’ll need to follow the video below to make sure you form icebergs to cross.

Then shoot the icicle to form another iceberg to cross the last area. Go upstairs and pull the lever. The stone from below should appear in the room. Use the blue season’s power again to make the room turn cold. Shoot the two icicles, grab the energy ball, and go up the icebergs. You have to be quick but if you do it right, the bars will open to the next area. Go up the stairs and pull the lever. Use the slingshot to shoot at the ice shelves to form new icebergs and try to get to the higher platform. Pull the next lever.

Fire ice slingshot shots at the blue balls to form icebergs. Use them to elevate yourself to a room with the final lever. Pull it and it should bring up the stairs in the water.

Enter the building on the right-hand side and hit the light with the blue season power so that the block can be moved within the blue winter sphere to get placed on top of the square area. Use the slingshot to shoot into the ice to form icebergs to climb on.

The puzzle upstairs should be straightforward. Use the ice blocks to press the switches and get one ice block up through the nearby room. At the end of it, you should have 2 blocks on the 2nd and 3rd switches and the last ice block inside the room. Climb the stairs and push the elevated ice block on the switch to proceed.

Hit the ice walls to form more icebergs and use them to find a ledge you can get to the higher platform. There should be a final lever. Pull it, go down and exit the building. This lever should break a ball near the statue in the water.

Retrieve the ball from the statue in the water and drag it to the stairs in the water to get it out. To do this, you will need to use the green season power on the ball. It should be a straight path followed by a left turn from the statue to get the ball out of the water. Use the blue season power on the ball once it’s on land to cross the bridge you couldn’t before. An ice bridge will be formed as you drag it along the bridge.

There should now be a floating stone above water. You’ll have to use a seasonal sphere somewhere that isn’t close to the floating stone. After, go near the stone and use the blue season power to freeze the water and form a pathway. Go back to the seasonal sphere you activated before to escape the ice and go up the passageway you just made.

Find the highest icicle and form icebergs by shooting them to get to the top. Once at the top, find a path that leads to a door. The rest should be simple from here. Just ascend the yellow platforms. You may need to pay attention to where to jump next.